Interview with Dr Thomas Maselis on (Prevention of) Skin Cancer

The number of people with skin cancer is increasing substantially worldwide. In the past 20 years the annual number of new cases in Belgium has risen by nearly 400%. The increased number of holidays in the sun, the use of sunbeds and inadequate protection during activities in the sun are possible explanatory factors. But Dr Thomas Maselis, dermatologist and founder/president of Euromelanoma, has seen a growing awareness among the general public in recent years of the importance of screening and protection of the skin. Time for an interview.

For a good understanding…

In order to prevent and detect skin cancer, it is essential to have a good understanding of the functioning of our skin and the different types of skin cancers.
To begin, Dr Maselis outlines the most important basic principles. “Our skin consists of three layers: the epidermis (where practically all tumours arise), the dermis (which ensures firmness) and subcutaneous fat. Below the epidermis are basal cells that are very well attached to each other. If these cells become cancerous, we call these basal cell carcinomas. Due to the strong mutual cell attachment, the chance of spreading (‘metastasis’) is fortunately minimal; 70% of skin tumours are basal cell carcinomas.”

“If the cells above this basal layer degenerate, we speak of spindle cell carcinomas. These are responsible for 20% of skin tumours. These cells too are rather well attached to each other, but in larger tumours they can still metastasise.”

“Between the basal cells there are pigment cells (called ‘melanocytes’) that protect the other cells from sunlight. These melanocytes must move between cells and are, therefore, highly mobile. So, they have very little attachment to the neighbouring cells. And that constitutes the big problem with melanomas (accounting for 10% of skin tumours); as aberrant melanocytes, they can spread very quickly, especially if they are located near to a blood vessel or lymph vessel. Because of this rapid metastasis, melanomas are unfortunately responsible for 90% of deaths due to skin cancer.”

The number of skin cancers is increasing rapidly

In recent years, the number of people with skin cancer appears to have increased substantially and Dr Maselis is very concerned about that. “In 2000, we diagnosed 11,000 new skin tumours in Belgium. Twenty years later, the counter stands at over 40,000, or an increase of 400%!  One in five persons in our country gets skin cancer before 75 years of age, with basal cell carcinomas involved in 70% of cases. It is also distressing that 400 to 500 patients die of skin cancer in our country annually.”

“Fortunately, we also see some positives. For example, around the turn of the century the survival rate of patients with a metastasised melanoma was only 4%. Today, we see that this has risen to 50%, thanks in part to new treatments for skin cancer. We also note at Euromelanoma that people are becoming more aware of good skin protection and, furthermore, are being screened at an earlier stage.”

The impact of UV radiation

The most important external influence is the sun, with ultraviolet (UV) radiation as the decisive factor. Dr Maselis explains how this works. “UV rays are divided into three types according to their frequency. Be aware that all UV rays are harmful to the skin. Ultraviolet A and ultraviolet B can penetrate the skin. Ultraviolet C, which is highly dangerous to the skin and eyes and deadly to single-celled organisms, is blocked by the atmosphere and ozone layer and doesn’t reach the earth. In recent decades, the growing hole in the ozone layer gave rise to a greater risk, but the ozone layer seems to be becoming thicker again in the past few years and the hole smaller.”

Induction of mistakes in genetic material

“UVA rays are present all day and cause a short-lived tan. These rays create ‘free radicals’, or atoms and molecules that are missing an electron and ’steal’ it from the cell. This too can damage the genetic material (DNA) in the skin cells. Subsequently, small permanent mistakes arise in the skin cells. The result? Sunburn, wrinkles, premature ageing of the skin, skin blemishes, a tan skin and a greater chance of skin cancer. In this context, by the way, I want to point out the
danger of sunbeds, which emit up to six times more UVA rays than natural sunlight in a Mediterranean country at midday.”

“UVB rays constitute only a small part of ultraviolet radiation. In Belgium, this radiation reaches its peak in the summertime between noon and 3 pm. It produces a slow, but longerlasting tan. UVB rays can damage the DNA of skin cells, and cause sunburn and skin cancer. In mountain areas, this radiation is much stronger than at sea level. Fortunately, our cells can repair themselves thanks to the so-called ‘nucleotide excision and repair’ (NER) process (that corrects mistakes that have occurred in DNA). However, this process works slowly and not always accurately. Consequently, cells with mistakes in their DNA can remain, leading to accelerated skin ageing and, later on, development of skin tumours.”

Suppression of the intrinsic defence system

“Everyone produces abnormal cells from time to time during his or her life, but they are usually cleared up at an early stage by the intrinsic defence system. Sunlight suppresses the defence system locally (which is also why eczema improves on exposure to  sunlight), but consequently starting skin tumours can continue to develop. This occurs mainly with chronic exposure to sunlight.”

The usefulness of the UV index

A UV index has been developed to understand when the sun is most dangerous. How does it work? Dr Maselis explains. “The UV index – also called the sun strength scale – is a number that represents the effect of the intensity of solar
radiation on unprotected skin. The sun strength is expressed in values from 0 through 11+.
The higher the UV value, the greater the potential damage to skin and eyes. For a value below three, use of a sunscreen is not necessary. Starting at a
value of three, sunscreen application is recommended, while for a value above five – and definitely seven – application of a sunscreen is strongly recommended.”

The search for new, innovative treatments for skin cancer continues to advance. Dr Maselis explains. “Before the turn of the century, specialists often resorted to  chemotherapy, radiation therapy
or surgical removal of  tumours. However,  surgical removal does not work well against melanomas. The emergence of immunotherapy, which has now existed for about 15 years, has created new possibilities for a targeted treatment.

Everyone produces (skin) tumours during his or her life, but under normal circumstances they are discovered by defence systems in an early stage. However, if tumours make themselves invisible to that defence, they can continue to grow. The strength of immunotherapy is that it makes these cancer cells visible again and so gives defence systems the chance to spring into action. If, by the way, someone is being administered immunosuppressants, for example, to help prevent rejection of an organ following transplantation, the chance of cancer – particularly skin cancer – increases significantly in this person.” 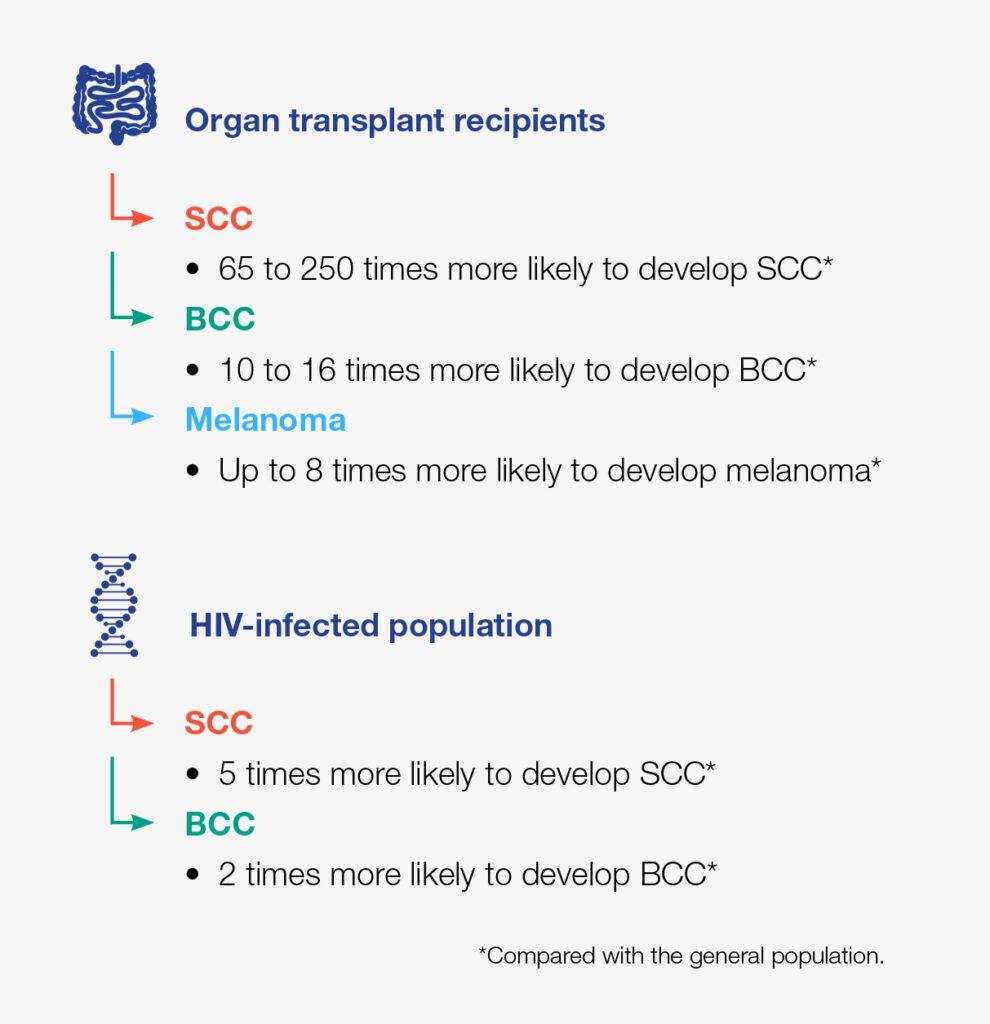 Development of skin cancer in immunosuppressed patients remains an important clinical challenge, because tumours in such patients tend to be aggressive and may respond poorly to conventional therapy

“In the fight against melanomas, gatekeeper gland research is also worth noting. In this treatment, a contrast agent is injected into the patient’s skin at the site of the tumour, after which the first gland that absorbs the agent is removed and examined for cancer cells. This method teaches us a great deal about the probability of metastases.”

Dr Maselis cites three important factors in protecting oneself from the sun and possible risks of skin cancer. He starts with the importance of shade. “The higher the sun is in the sky, the shorter the path of the light through the atmosphere; consequently, short-wavelength UV rays are filtered less. That is why skin burns less quickly at sea level than in the mountains. So, it’s best to avoid sun exposure at midday. Take shelter under a parasol, awning or tree.”

A head covering is essential, but choose a hat with a broad brim instead of a cap. And sunglasses that offer 100% UV protection are a necessity, because the eyes must also be well protected. Our eyes contain quite a few melanocytes, which is why a
malignant tumour can develop in the eye.”

“The protection factor of sunscreen is determined in tests on volunteers by measuring the Minimal Erythema Dose (MED). The MED is a value that indicates how much sun burden (or UV radiation) the skin can handle without signs of burning. For every skin type there is a number, the basic unprotected sun exposure time. Few people realise that on a sunny summer day, 10 minutes of exposure to sunlight can already be enough to exceed the MED! So, sunscreen with a high protection factor is the best choice – and frequent application is also essential.”

In 1998, Dr Maselis founded Euromelanoma, an association that aims to inform and raise awareness of skin cancer among the population through targeted campaigns. In addition, it  addresses scientists and (national and European)
policymakers on this topic. Dr Maselis is proud of what Euromelanoma has already accomplished. “Currently, we are active in 34 countries. We are guided by a network of European dermatologists who collaborate on a voluntary basis. We not only regularly publish scientific publications to improve care for skin cancer, but also organise public screening days in which people are checked for skin cancer free of charge; and successfully, because to date we have managed to screen
over 450,000 people! That is also an important final message I want to give: have your skin examined regularly and/or do a self-examination, so that suspicious areas can be handled
early. Prevention is better than cure!” 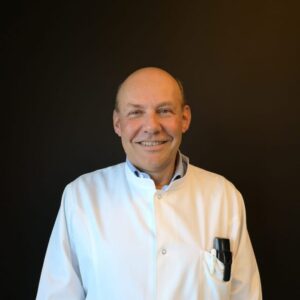 Dr Thomas Maselis studied dermato-venereology at KU Leuven and phlebology at the Rijksuniversiteit Groningen [University of Groningen].
He is the founder and president of Euromelanoma, and is also a spokesman for the professional and scientific association of Belgian dermatologists.
Based on his specific interest in dermato-oncology (skin cancer), he regularly gives lectures and seminars on general dermatology, skin surgery, aesthetics, etc.